Creating the Most Beautiful Urban Library

The New York Public Library tasked LiRo with providing both architecture and interior design services for the renovation of The High Bridge Library, which they wanted to become a neighborhood landmark and gathering place.

LiRo transformed the aging High Bridge Library, erected in 1976, into a welcoming space permeated by daylight. The objective of this project was to provide a general renovation and to modernize the facility and its services for the staff and the public. The New York Public Library wanted to remove the recess at the outside of the entrance area so that it would not be a place for people to congregate.

In response to these specific requests, LiRo literally raised the roof of the building to allow natural light to flood in, creating a luminous and expansive space that inspires gathering and learning.

LiRo also took some other creative approaches to turn this location into the warm community center it now is. In homage to the neighborhood’s defining landmarks, LiRo’s in-house talent created watercolor murals of the High Bridge aqueduct and water tower for the library’s main entrance, lobby, and children’s reading room. A whimsical three-dimensional illustration of a tree emerges from the mural to shelter the children’s story area in which children gather on a circular amphitheater covered in grass-imaged carpeting. Bright green circles of flooring denote gathering areas in both the children and adult reading rooms, while brightly-colored modern furniture creates a cheerful atmosphere in a clean, modern space welcoming to adults and children alike. 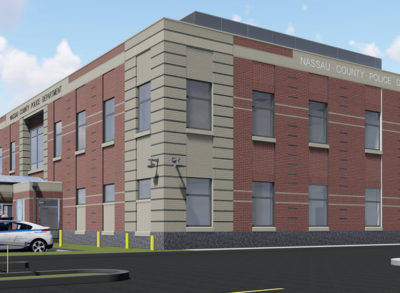